DIY an Electric Bicycle is not a easy task, but ebikes aren’t just difficult to get hold of at the moment but are also getting more expensive. As such, it’s not surprising that increasing numbers of people are considering the apparently genius idea of building their own ebike. But is it legal to build your own eMTB? What are the legal requirements and potential pitfalls? We clarify things here.

What are you actually allowed to do and what do you need to pay attention to if you want to convert or build your own ebike? A quick warning: to be able to describe everything accurately, it’s important to look at legal regulations as well as DIN standards and various guidelines in detail. This article will be informative and interesting, but a little complicated too.

DIY An Electric Bicycles or pedelec, what are we talking about?

When we talk about an ebike, we mean the legal definition of a pedelec, which is classified as equivalent to a normal bicycle. As such, you don’t need a licence or insurance to ride one.

The motor (with its nominal power limited to 250 W) supports the rider’s pedalling input up to a maximum speed of 25 km/h. Internationally, the term EPAC (Electrically Power Assisted Cycle) is also used. This is where it starts to get interesting.

By adding a motor to a bike, it becomes a pedelec, for which different standards and rules apply. For example, the EU Machinery and EMC directives both apply to pedelecs.

So, this article is about the kind of ebike you can buy at your bike shop, except one that you’ve built yourself. Illegal, chip-tuned ebikes won’t be discussed here.

By adding a motor to a bike, it becomes a pedelec, for which different standards and rules apply.

What does the german Zweirad-Industrie-Verband (ZIV) say about self-built ebikes?

We asked ZIV Managing Director, Ernst Brust, to give us some legal grounding. “Pedelecs that are built by private individuals for their own use and that are used on public roads also fall under the Machinery and EMC directives and have to be tested according to the DIN EN 15194-2017 standard. That also includes providing a CE mark for the pedelec.”

But what exactly does DIN EN 15194-2017 for ebikes encompass? What do you have to demonstrate when having a bike approved? Industry leaders including Zweiradmechaniker-Handwerk, velotech.de, VSF., Zedler Institute and ZIV have produced a document (German only) outlining what you need to know about retrofitting E-drives.

DIY An electric bicycle in it, they list what is required to meet the standard and which documents must be provided:

There are several possible legal consequences for retrofitting by a dealer or end-user:

The data required in the declaration varies depending on the type of product.

Liability is usually assumed by the manufacturer.If the manufacturer or importer fail to provide a conformity declaration for their product, they can be fined up to € 30,000.

Two standards, ISO 4210 and EN 15194 apply to ebikes. Pretty much all frames and bike parts worldwide are tested and approved according to these standards.

A conformity declaration is the manufacturer’s or importer’s way of demonstrating compliance of a product with EU directives and standards.

CE marking is the responsibility of the manufacturer and only rarely is the product independently tested. In the first instance, this mark is a type of promise. It says that a product meets relevant EU standards and has been tested accordingly. Every bike that you buy online or in a shop must have a CE mark.

What options are there for self-built ebikes?

For this article we considered the following three scenarios in more detail: 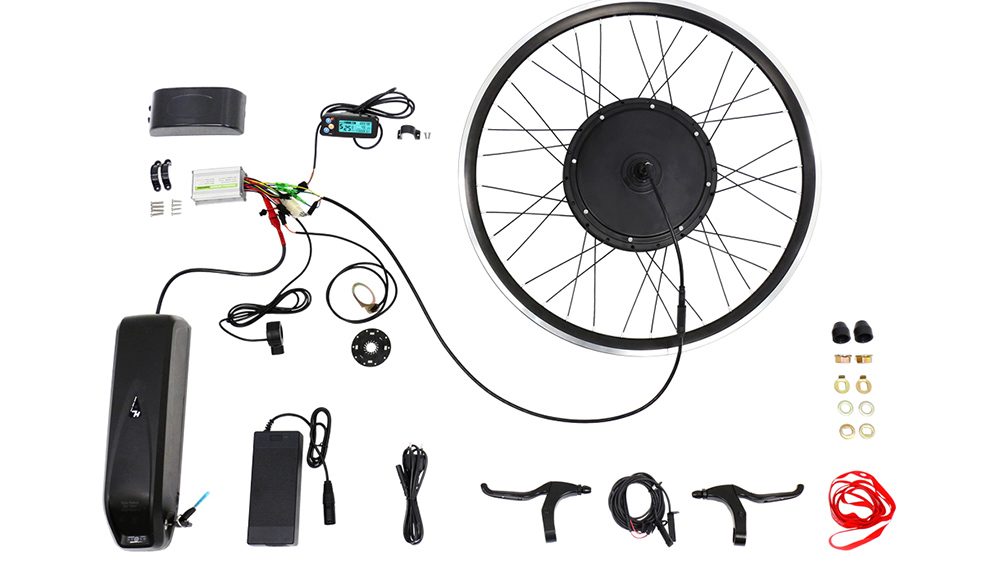 Here is the kit used in the conversions. You have a rear wheel motor, controller, thumb operated throttle, on/off switch, brake levers with kill switches (not used), and battery to control cable.

The brake levers had kill switches on them. Since the throttle is thumb operated, the kill switches and extra wires did not seem necessary. This proved true later on. If you need to stop, you just let go of the thumb throttle, and the motor stops. It is intuitive.

The donor bike needs to be a sturdy frame. It is said that cheaper bikes make good e bike frames. This may be true from the motor point of view, but if you want to pedal the bike too, maybe not such a good idea.

Installing the rear wheel motor was pretty straightforward except for the shims, which proved to be some work.

The motor and wheel appear very high quality, durable and well built. However, they are an inch or so wider than the old rear wheel and the bike frame dropouts.

I just took the frame, placed it on the ground, and pulled it out a bit. This may not be the best way to do it, but It worked. Just watch out how far you pull as the frame will bend easier than you think and is not as easy to push back into original position.

The next thing to do is install the switches. This is pretty easy except for removing your old handlebar grips, if you have them.

One trick to removing old grips fairly easily is to take a screwdriver and pry open the grips, and then pour some soapy water into the opening. Wiggle the grips around (you might need a pair of pliers or vise grips) until they break loose, pour in more water and so on.

Before you take your old gear shifters off, look and see where the switches will be mounted. The thumb throttle lever on the kit described here was a little short, so you want to get it as close as possible to the gear/brake lever as possible.

The on/off switch can be easily mounted on the other side.

After mounting the switches, carefully dress the wires back to the motor area. Make sure to leave a little slack around the headset/headtube of your bike. This is to allow the handlebars to turn freely from side to side.

The next thing to do is to decide what kind of battery box you want, measure your battery and controller, select the box, drill some holes, cut a wire opening, and install the box.

Line the box with foam or other insulator of your choice.

Note the position of the controller in the back and the battery in front. This is in case of a fast stop, the circuit board on the back end (nearest the controller) will suffer the least.

Well, this is the beginning of the fun!

After the kit is installed, be sure to road test it. The gears on the new freewheel probably need adjusting, as well as the rear brakes.