First you should know the reason of  the broken spoke on bike.Why Are Your Bike Spokes Breaking? Let’s first address why spokes break. The spokes purpose inside the wheel is to balance the rider’s weight evenly, distributing the force around the entire wheel so it doesn’t collapse like a pancake. 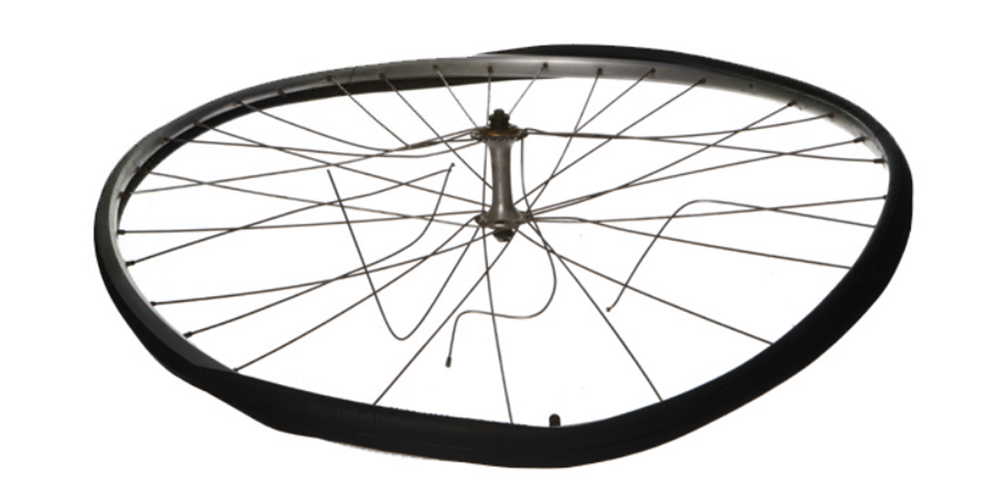 If you still aren’t sure what the spoke is, it’s all the thin metal bars like spider-webs around the wheel. Some are more ornate and ‘Spokefull’ than others, but the standard model has anywhere from 28 to 144 spokes.

The average bike has 36 spokes. All of which are subject to break at some point.

It is not uncommon and riders say it will happen eventually so it’s best to know the drill. Spokes are no joke (forgive me for that one) as they maintain the entire wheel and also keep you in a straight line and moving forward.

The Broken Spoke on Bike Reasons may be:

If you’re that rider that’s fearlessly hitting every curb at maximum force and coming off the curbs even harder, you’ll need a bike that’s made for that.

If yours keeps squashing like spaghetti, it may be the wrong design for you. Later in this article, I will give affordable recommendations that may suit your needs.

The wheel is badly constructed.

Often designers will cut corners and the price will reflect that if your spokes seem to bend at every jolt. I’ll lead early in this article by saying that if you’ve broken more than 4 spokes this month (which is happening to many riders right now) invest in better wheels. Don’t try to fix them spoke by spoke which many do as well. At a certain point, the wheel will be too far gone to mend and repurchase will be in order.

You’re too heavy for that bike.

No shame in your game, many of the people popping spokes are 6’7″ football players weighing 250lbs or more. If this is the case for you, you probably have wheels with too few spokes. Invest in higher quality and higher spoke-quantity. This could ultimately fix everything for you.

Is it the right side?

If you notice the damage keeps coming from one side in particular – it could be the right side popping against your chain drop and the cassette. In this case, you’ll need drive-side spokes to prevent this from giving you future trouble. The free tip here: change all of your right-side spokes at once so you don’t have to go back one at a time. It will save you a headache and you’ll thank me later.

If you’re riding in the city hitting curbs on a mountain bike with fewer spokes than you need, you’ll be repairing spokes far more often. But you’re here reading this article, so you get points for trying to educate yourself. If the spokes are breaking too frequently, invest in a top-rated wheel to avoid the headache.

How to Check The Broken Spoke on Bike:

Spokes will fatigue at some point as all metals do. You can repair them up to a few times, especially if you’ve already invested in a quality wheel that you know has some life left in it. Don’t throw it out, just know how to maintain them.

Check your wheels on a regular basis and adapt them to your road-type and terrain.

This is not difficult and the technique is similar to playing the guitar. String it like you’re playing a note and notice if each sound relatively similar. You’ll hear the note flatten and sound off-pitch compared to the others if it’s loose. This is the spoke that needs to be tightened.

Don’t overtighten your spokes either as this could cause more spokes breaking. You’ll feel the perfect friction that should sound melodic and in tune with the other spokes’ pitch.

Replacing Your Own Broken Spoke on Bike 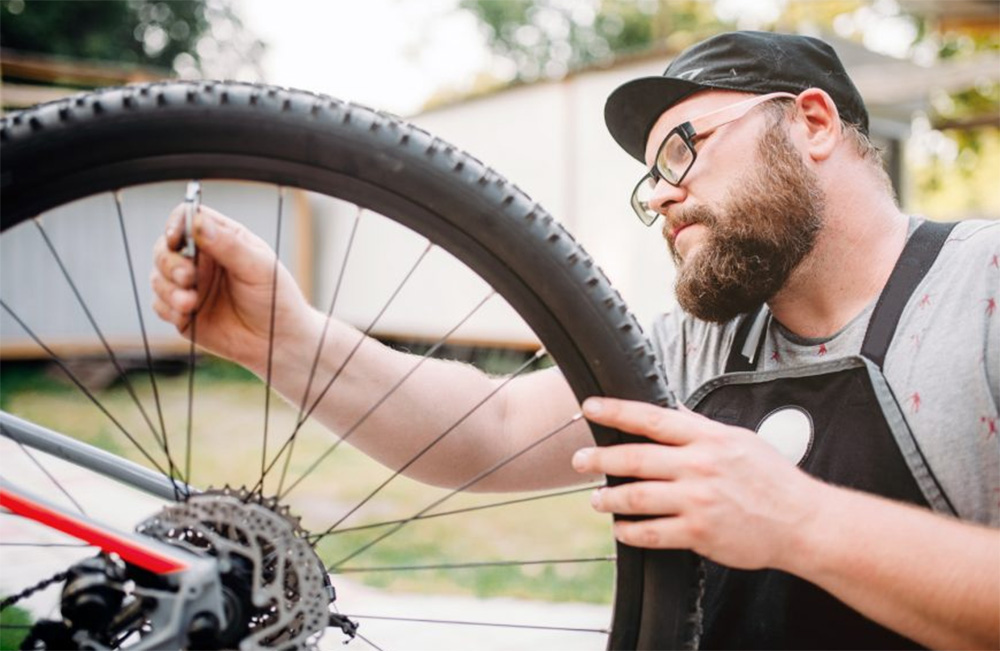 You are a professional biker and think it’s about time you learn to mend this on your own. Save some cash too through these simple steps:

1. Remove the wheel from the bike

Then remove the tyre, tube and rim tape, unless your rims are tubeless models with fully sealed rim bed, with no access to nipples from behind. Unscrew the threaded end of the broken spoke from the nipple.

Inspect the nipple flats for wear. If they’re tatty, now is a good time to replace it. This one looks to be in good shape, so it can stay. Poke the other broken end out of the hub flange.

2. This particular spoke broke in the most usual spot, the rear drive side. These spokes are carrying most of the drive forces and can also be damaged by an over-shifted chain.

Remove the cassette to access the spoke hole in the flange. Here we’re unpicking the spoke from the ones it crosses from hub to rim, noting whether it passes over or under the others. On a traditional three cross lacing pattern, a spoke would go under, under, over the three other spokes on its way to the rim.

Spokes come in different lengths, depending on the hub and rim you’re lacing together; they’re available in 2mm length incrememts. The right length is important.

Too short and the spoke won’t pass into the rim bed for support, leaving the nipple carrying the torque loads.

Too long and the nipple will bottom out on the unthreaded spoke shaft, or the end of the threaded portion could (on low profile rims) poke through the rim tape, causing puncture risk.

On-line spoke length calculators are a great way to find out what spoke length you need. Ours is a perfect match.

4. Getting the spoke into the hub flange can be a task, especially on rear drive sides, where spoke length is short and hub shell width is narrow.

Navigating a disc rotor doesn’t help, though you should be able to do it without removing the rotor.

Don’t be afraid to flex the spoke to get it lined up with the flange spoke hole, you’ll need to present the very end perpendicular to the flange otherwise the spoke threads will catch. Make sure you enter the hub flange from the correct side.

5.  Sometimes the new spoke head won’t want to seat squarely straight away, the spoke can take a bit of jiggling and flexing to get it orientated.

So it points in the right direction and the head sits flat against the the hub flange.

Make sure when you thread the spoke that it follows its assigned pattern. Here it’s a three cross pattern, so our new spoke passes over two spokes and under the third (not in shot) before engaging the nipple.

If you’ve removed the rim tape, it is possible for the nipple to get pushed inside the rim and rattle about. It’ll usually fall out with a gentle shake.

Use the threaded end of your broken spoke to hold it in position while the new spoke is engaged. Once a turn of thread is achieved, the old spoke can be discarded.

7 . With the end of the spoke engaged, tighten the spoke with the appropriate size spoke key.

Use a dedicated spoke key, not one in a multi-tool as they’re often poorly finished and can lead to damaged nipples. We like Park Tool’s keys and the Spokey; the Park Tool one is in shot here.

8.  Once the new spoke is in position, you can either finish the truing job with a wheel truing stand, or if you don’t have one, you can improvise, as we’ve done here.

Place the wheel back in the frame. Position two small zip ties, one on each seat stay or fork leg (depending on which wheel you’re working on) at rim level and angle the ends so they just clear the extremes of any run out. The zip tie ends act as visual guides to the tension adjustments you make as you return the wheel to true.

Replace your cassette, if you’ve had to remove it. Then when you’re happy with the true of the wheel, replace the tape, tube and tyre.

If you break a spoke, don’t sweat it. The tips and the entire internet are here for you to help you replace it. If you hit a curb or breaking spokes has become too common of a chore in your life, invest properly.

Spokes will break from fatigue and remind me of all humans that way. But with a little love and care, you can maintain it better. Being a knowledgeable shopper will go a long way.
Then you’ll be free to ride off into the sunset, the Bermuda Triangle, or wherever the devil you please.