Charge eBike with solar charger seems a completely logical thing to do. After all, it represents totally free travel, without even plugging the bike battery charge into a house socket. 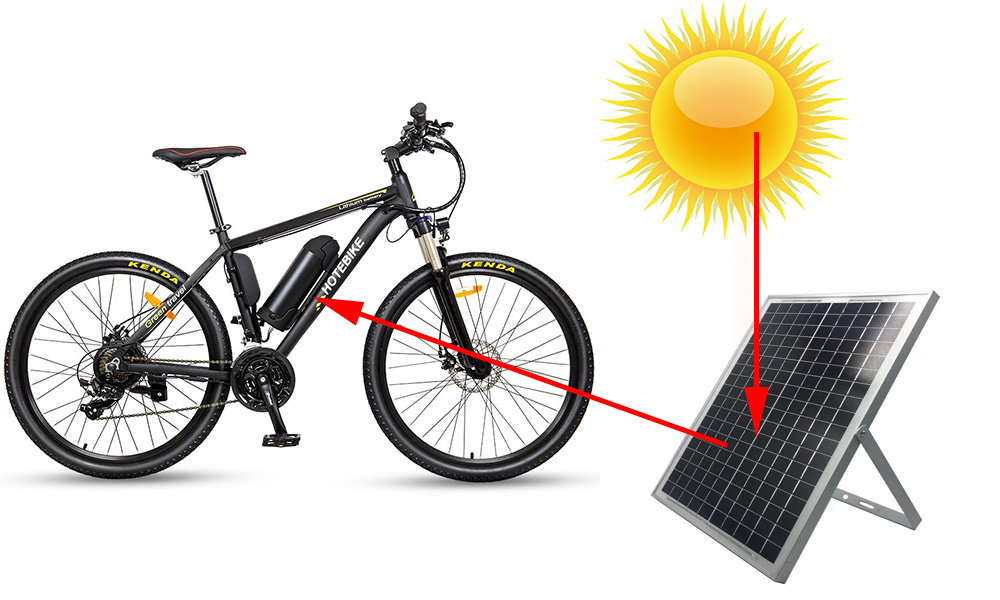 But is Charge eBike with Solar Charger as simple as that?

There a few of things you really need to know before you try to charge your ebike with solar, if you don’t want to fry your bike batteries.

The easiest way to charge an ebike with solar panels is to connect between 100 to 200 watts solar panels to an inverter and use that to power your existing ebike charger. If it’s intended to charge the ebike at night, then add a solar battery charger and a 50Ah lithium phosphate battery.

Therefore, keep on reading as you’ll learn a lot that could help you change the way you charge your eBike!

Taking advantage of reusable sources such as light and sun to produce electricity isn’t a new thing. It has been around for at least a decade.

But are we able to use this technology to charge our precious eBikes? Yes, we are!

If we can help people power their meet their household electricity needs with the help of solar panels – it would be really bad if we weren’t able to do the same for our eBikes, right?

Charging an eBike with a solar panel is definitely possible. To even make things even better, such chargers already exist.

I had the chance to write a solar panel charger review where I wrote about a specially designed for electric bikes – so I highly recommend checking out my review!

I believe such an investment will save you a lot of time and yet will help you to start experiencing the benefits of a portable solar charger for eBikes.

I’ve briefly mentioned a couple of benefits – but keep on reading as I’ll touch on more benefits by the end of this article!

How Many Watts to Charge eBike with Solar Charger?

Given that most e-bikes are equipped with a capacity of 48V, how many solar panels would be required to charge this battery fully?

But, even more importantly, when you acquire the right solar panels, the question is whether the charger will charge your eBike’s battery as fast as power outlets do.

To answer this question, we must first take into account the battery’s capacity. It isn’t enough to simply know the battery voltage.

As a result, for a 48V eBike battery, you would require a charger with at least two solar panels capable of producing at least 200W.

But the best feature of a standard eBike charger is that it includes an inverter, which is necessary because eBike chargers operate on alternating current.

There is only one thing left to do: select the appropriate plugin type for your electric bike, and you are ready to ride.

The most important feature is that many eBike chargers can charge a bike at the same speed as a standard power socket.

How Much Power Does a 100-watt Solar Panel Produce?

100-watt solar panels, as the name implies, are intended to produce a maximum power output of 100 electrical watts.

However, this is the notional amount of power it can produce in Standard Test Conditions, also known as STC. Obtaining 100 percent power output from a solar panel determined by the STC is a long shot in the physical world – it hardly ever happens!

The amount of energy you can obtain from this module is dependent on your geographic location and weather conditions.

There is a difference in the sun intensity between a sunny and a snowy geographical location. This is called irradiance.

Therefore, you can expect a higher wattage during summer and reduced wattage in winter.

In ideal circumstances, the amount of energy generated will be equal to the wattage of the solar panel multiplied by the number of peak sun hours.

That is to say:

The average number of sun hours in the United States is 4. As a result, with a 100 watts solar panel, you can generate approximately 400 watt/hours of electricity every day on average.

Furthermore, you could receive up to 600 watts of solar energy each day, depending on your location, especially for those who live in states like Arizona, Wyoming, or Nevada.

Weather conditions, dust, and other variables could cause your total output to reduce by approximately 30%.

Can You Connect a Solar Panel Directly to Your Battery?

Unfortunately, you can’t just purchase solar panels, connect them to your eBike’s battery, and wait for the battery to be charged.

Solar panel chargers operate with the help of a “system” that helps with the collection of the energy, transfer of the energy, and outputting the inverted energy into the battery.

On their own, solar panels can barely fully charge a 12V battery on a very sunny and bright day. That’s why solar panels are just one of the components in these charging systems.

Along with the solar panels, you would need a charger controller (MPPT) which helps maximize the output power you can get out of the solar panels. These are really expensive, but without them – it would take ages to charge an eBike’s battery. That’s definitely something to keep in mind when building your solar eBike charger or when you’re hit with the relatively higher price tag of eBike solar chargers.

On top of that, you would need an inverter as eBike batteries use alternating current.

Luckily, the biggest part of the system is the panels, while everything else is pretty compact which makes the charging eBike with solar panels easy on the go.

How to Charge eBike with Solar Charger?

1. Connect the Inverter and Solar Charge Controller to the Battery

To begin, connect the inverter and solar charge controller to the battery via a battery connector.

To ensure maximum safety, it is recommended that a fuse be installed on positive leads that link the battery to both the inverter and the charge controller.

2. Install a Solar Panel and Connect It to a Solar Charge Regulator

Next, hook up the charge controller to the solar panel using the included cable. Again, including a fuse between the two is the safest course of action in this situation.

A number for the inbound PV voltage will appear on your charge controller’s screen, signaling that the panel has been successfully installed and connected.

To ensure that your solar panel is charging, place it in the sun and check the PV voltage on the voltage regulator.

This indicates that the solar panel has been effective in charging the batteries. Now you must connect your charger to the inverter outlet to determine whether it is receiving power.

What Do You Need to Charge an E-bike With Solar Panels?
Solar ebike charger setup with inverter
My preferred solar charging setup for an ebike using standard charger

Unfortunately, you cannot simply buy solar panels, attach them to the battery of your eBike, and sit around waiting for your battery to charge.

Solar panel chargers are operated with a set-up, which assists with the collection, transfer, and output of reversed energy to the battery, among other things.

To make your own charger, addition to the panels, you will need a charge controller, which boosts the amount of output power obtained from the solar array.

The problem is the battery voltage, which as we know is between 24 volts to 48 volt normally.

A standard 100 watt solar panel has an open circuit voltage of about 22V, which reduces considerably when hooked up to a load.

You would need at least 3 of these connected in series to produce enough volts to charge a 36 volt ebike battery, for example.

If you’re building your own solar electric bike charger or looking to buy solar chargers, keep this in mind as you consider your options. It get complicated.

I prefer to use the standard eBike battery charger operating on alternating current, and use an inverter to feed it. It’s the simplest solution.

Benefits of an eBike Solar Charger

But on top of that, I believe that another big benefit is the ability to purchase pre-made solar chargers for eBikes.

These chargers include all system components that you would need – but they also make solar chargers very compact.

I am a big fan of Bakcou’s solar charger which is compact thanks to the folding design that allows easier transporting.

If you live surrounded by a great climate, you should definitely take advantage of the sun and charge your eBike even when you’re not on the go.

Even though eBikes don’t really add up much on the electricity bill – why not save some money when you have the chance.

Investing in a charger will definitely pay off in the long run!

But one of the benefits that might not affect everyone the same way is the relief of knowing that you don’t have to worry about the range or have a range-anxiety every time you take your eBike on longer rides.

According to a recent study, choosing an electric bike as your primary transportation mode and ditching car transportation will go a long way toward lowering the carbon footprint left in the environment.

While electric bikes are generally considered environmentally friendly, you can make them more ecologically friendly by charging them using solar power rather than an electric source.

It is a more sustainable energy choice, and it can provide you with a service that is comparable to that of electricity.